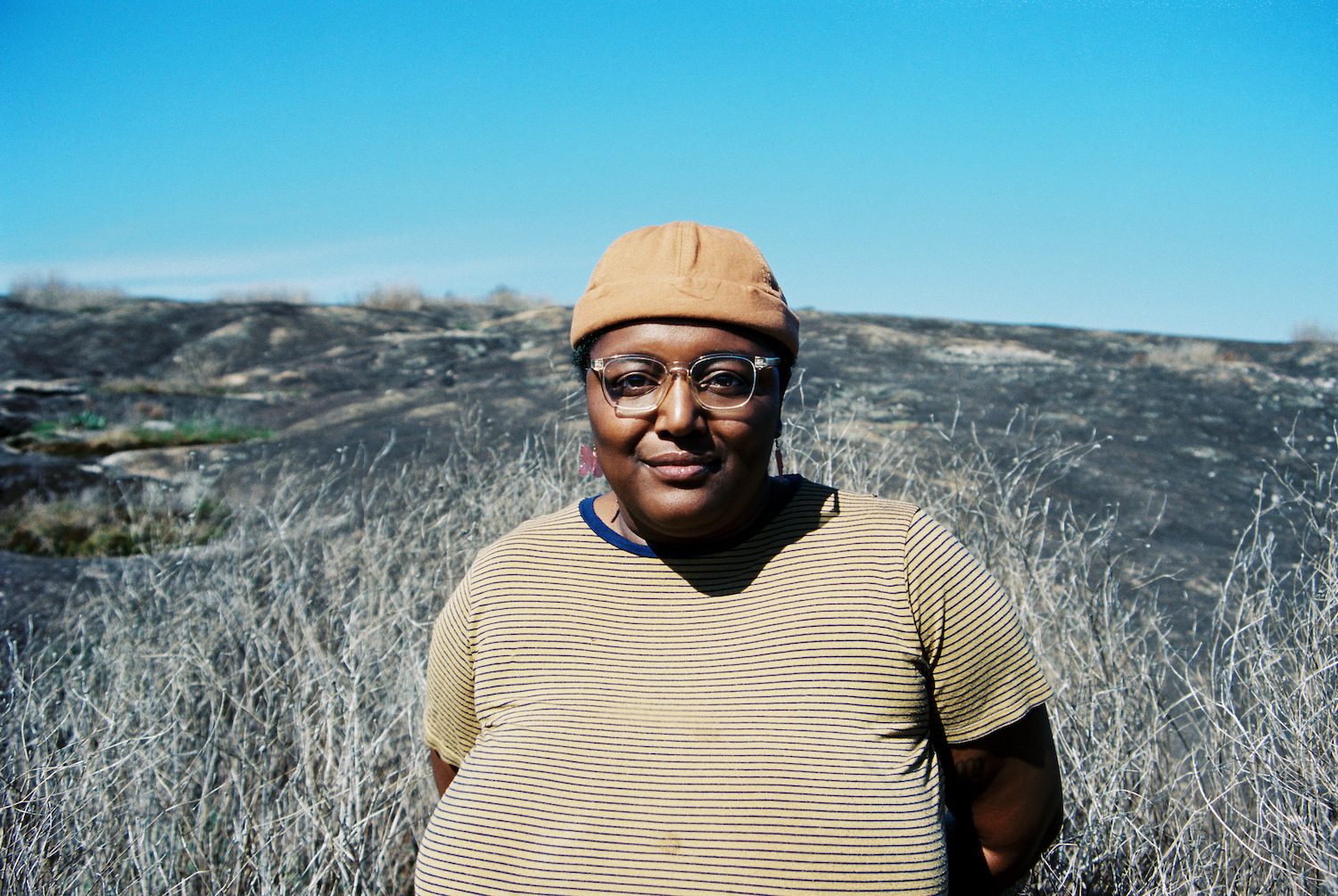 Over the next several months, we’ll be spotlighting each of these artists one by one to find out what they hope to accomplish during their year-long Heart of the Arts residencies. In August, we sat down with printmaker and muralist Jasmine Nicole Williams, who was among the first to move into her studio space, which is located on the Atlanta History Center Midtown Campus. Founding partner Atlanta History Center first signed onto the Heart of the Arts program in late-2020 when it hosted four temporary storefront installations.

Read below about Williams’ background, what inspires her and what she’s working on.

Williams was born and raised in metro Atlanta. She received her Bachelor in Fine Arts in Printmaking from the University of West Georgia (UWG). She serves on the Atlanta Printmaker Studio’s board of directors, and was a 2021 Hambidge Cross Pollination Art Lab Fellow and a 2020 Hambidge Resident. She first heard about the Midtown Alliance Heart of the Arts Studio Residency Program on Burnaway.com, where she saw a call for applications earlier this year.

“I wanted the residency because I have been wanting to start a practice outside the academic setting,” Williams said. “I feel like I did that with the Hambidge Residency, so this was to steep myself in my practice and have the space to be free to work for a year. I’d also like to have a solo exhibition at the end of this.” 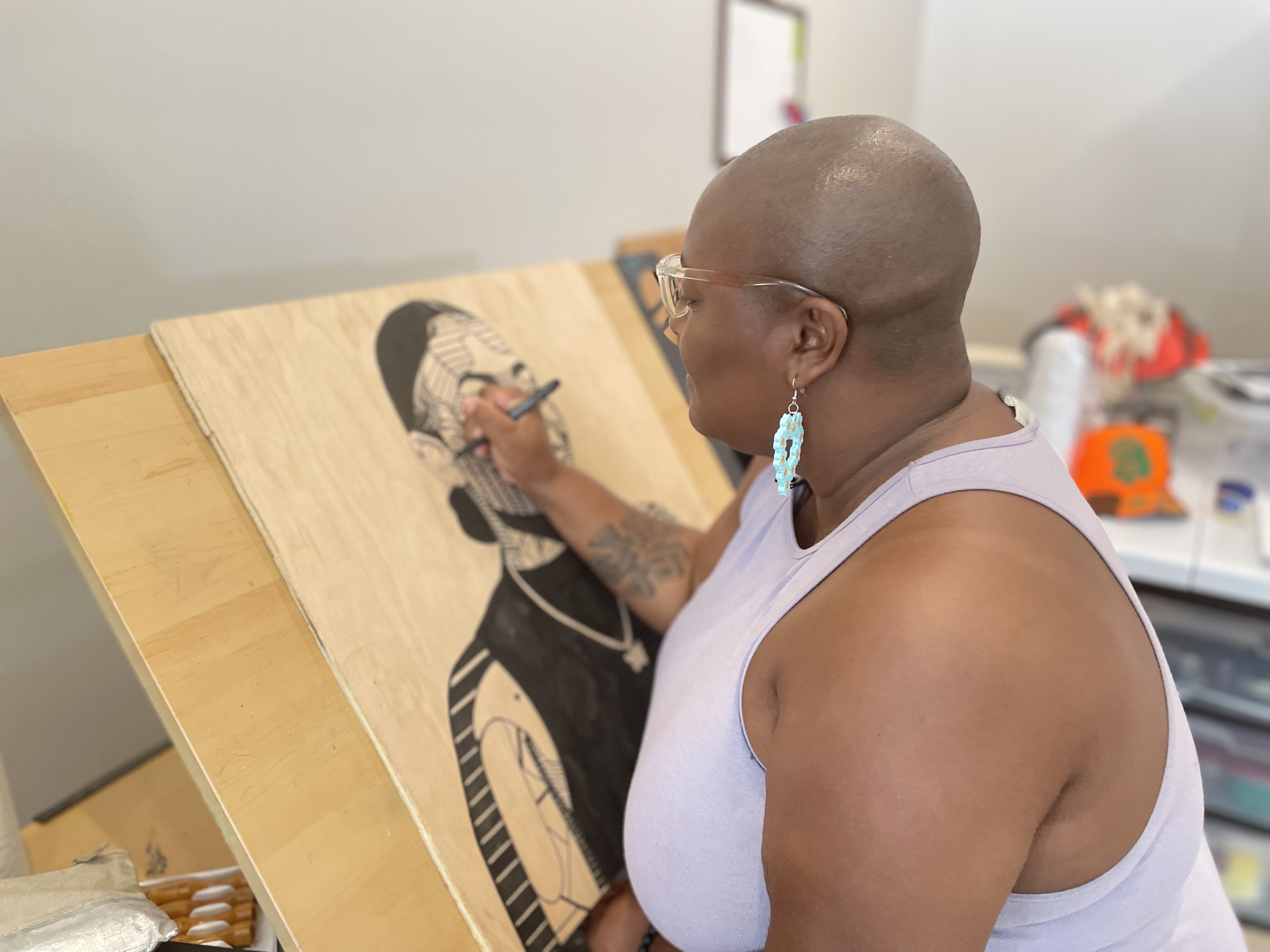 She said she loves Midtown and is excited to spend the next year creating here.

“Growing up right outside of Atlanta and coming to the city, I got to see how it’s changed,” Williams said. “It’s been really cool to see. Being central to the city is important to me.”

“I create my art for Black women and girls specifically,” she said. “I feel like there’s so much brilliance in our experiences. Once we are connected and appreciate the contributions of Black women, girls and femmes, we have a broader appreciation for the human experience. That’s who I create it for, but I hope everyone can see my work and appreciate my work, and in turn appreciate themselves and the nuances of themselves.”

This theme can be seen throughout Williams’ “AND WHAT?!” series of portraits. Williams creates these woodcut relief prints by hand in her studio, as she has not had regular access to a printing press since the pandemic began. 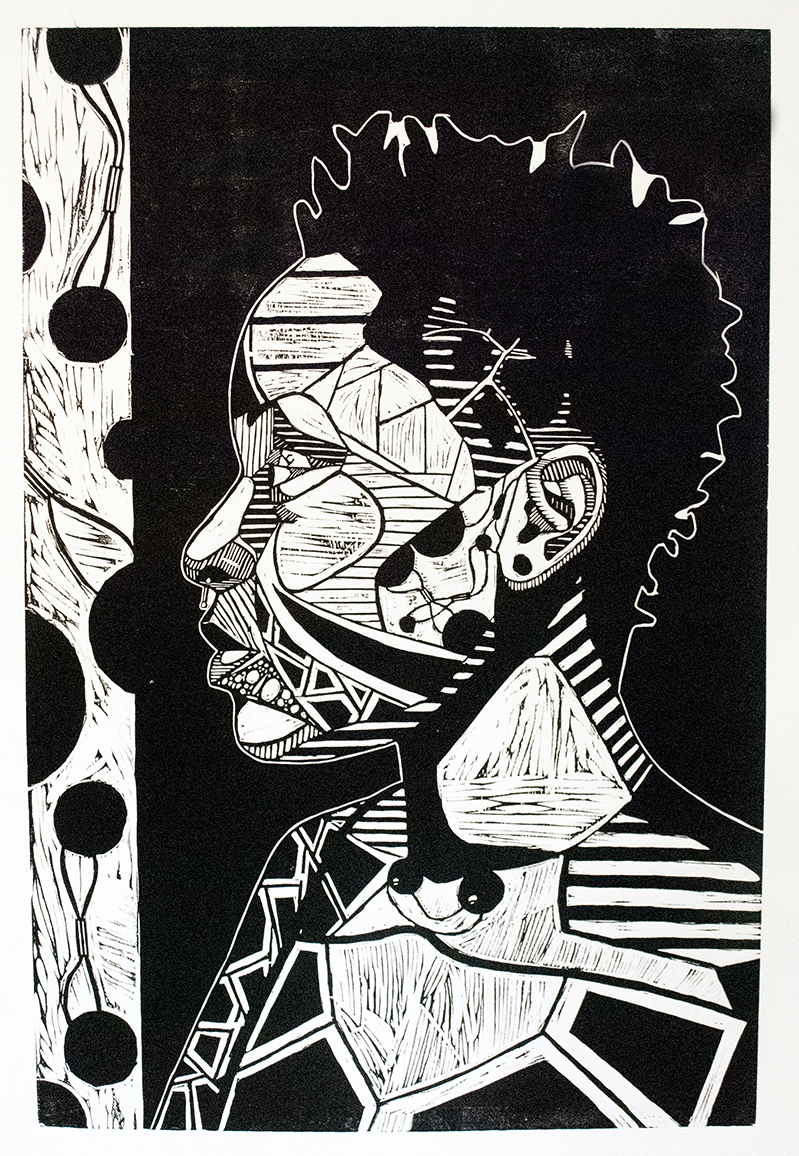 “I want this work to be a catalyst for unlocking Black women being their full, unapologetic selves,” she said. “Growing up, Black women and girls are charged with the responsibility of protecting their own bodies, but they suffer the consequences of anything happening to that body. We have to shrink ourselves in order to make other people feel comfortable. If a Black woman is comfortable enough in her adulthood to be able to unlearn that, then that’s beautiful, but a lot of Black women don’t. There have been generations of Black women suppressing themselves and just going through the motions.”

Hear Williams describe her work in the video below:

One exciting moment for Williams came when Stacey Abrams’ campaign approached her about doing a piece of Abrams likeness for use on t-shirts and other materials. Coincidentally, Williams was already working on a print of Abrams and was more than happy to participate. She learned that the campaign planned to include one of her shirts in Oprah’s swag bag when the iconic host, TV producer and philanthropist came to Atlanta to campaign for Abrams. Williams was just happy about the prospect that Oprah would see her work, and shocked and thrilled when Oprah posted a video of herself on Instagram dancing in the t-shirt on Thanksgiving Day 2018.

“I was screaming at the top of my lungs,” Williams said of the moment when she saw the video. “That was mind-blowing. I thought, ‘I’m never going to fail. Oprah wore my art.’”

Williams is looking to expand her practice during her residency by creating more murals. She has already worked with Atlanta-based Living Walls, the City Speaks to paint two, one for Nike and one for Adult Swim. 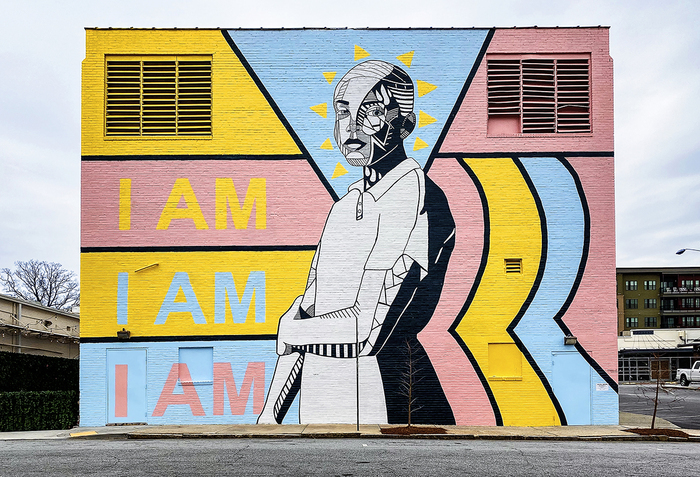 “I’ve been trying to figure out how my fine art practice and my mural practice marry together,” she said. “The reason why I was attracted to print making was the nature of multiples, the accessibility of it all. You can see a print in multiple places at the same time. The mural takes away having to access a certain space like a museum in order to experience art. You can walk down the street and see something beautiful and impactful.”

The Heart of the Arts selection committee knew that Jasmine's style and important narratives would resonate with the community, said Lauren Bohn, project manager of urban design and placemaking at Midtown Alliance.

“The timing feels perfect since Jasmine is beginning to expand her printmaking practice into other art forms, such as murals," Bohn said. "The Residency Program is intended to serve as an accelerator for creative entrepreneurs, and we’re excited to see how a year of dedicated studio space and career support within the heart of our district can help Jasmine grow and establish a thriving small business. She’s a great investment for Midtown too: this artist is going places, and her affiliation with Heart of the Arts will benefit our own growing program.”

After having limited contact with other artists and members of the community for the past year and a half, Williams looks forward to connecting with her cohort of Heart of the Arts residents as well as members of the Midtown community.

“I really want to broaden my art community, just wanting to invite people into this space to hang out and get comfortable, and get acquainted with what I’m doing,” she said. “I want to have people hang out in the courtyard of the Atlanta History Center, watch a movie and just activate the space.”

Williams is already acquainted with some of her fellow residents. She counts Jamaal Barber, another printmaker and Heart of the Arts resident, as one of her mentors. She first connected with him when she was a student at UWG and worked in a gallery where he had a show. After moving to Atlanta in 2017, she worked as his print assistant and the two started a podcast called Studio Noize, which Barber still hosts today.

“The other artists and I have a lot of tangential friends,” she said. “I am really honored to be in a space with these people who have been practicing for so long. Just being associated with them is so cool. I’m digging all of them.”

Read about the other Heart of the Arts residents and learn more about the program here. 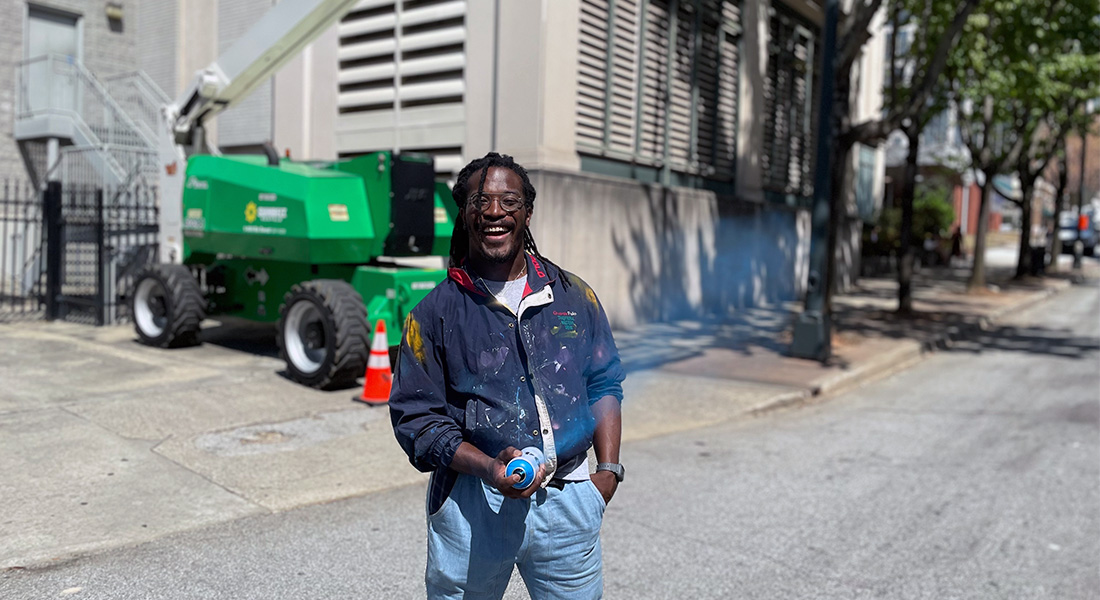 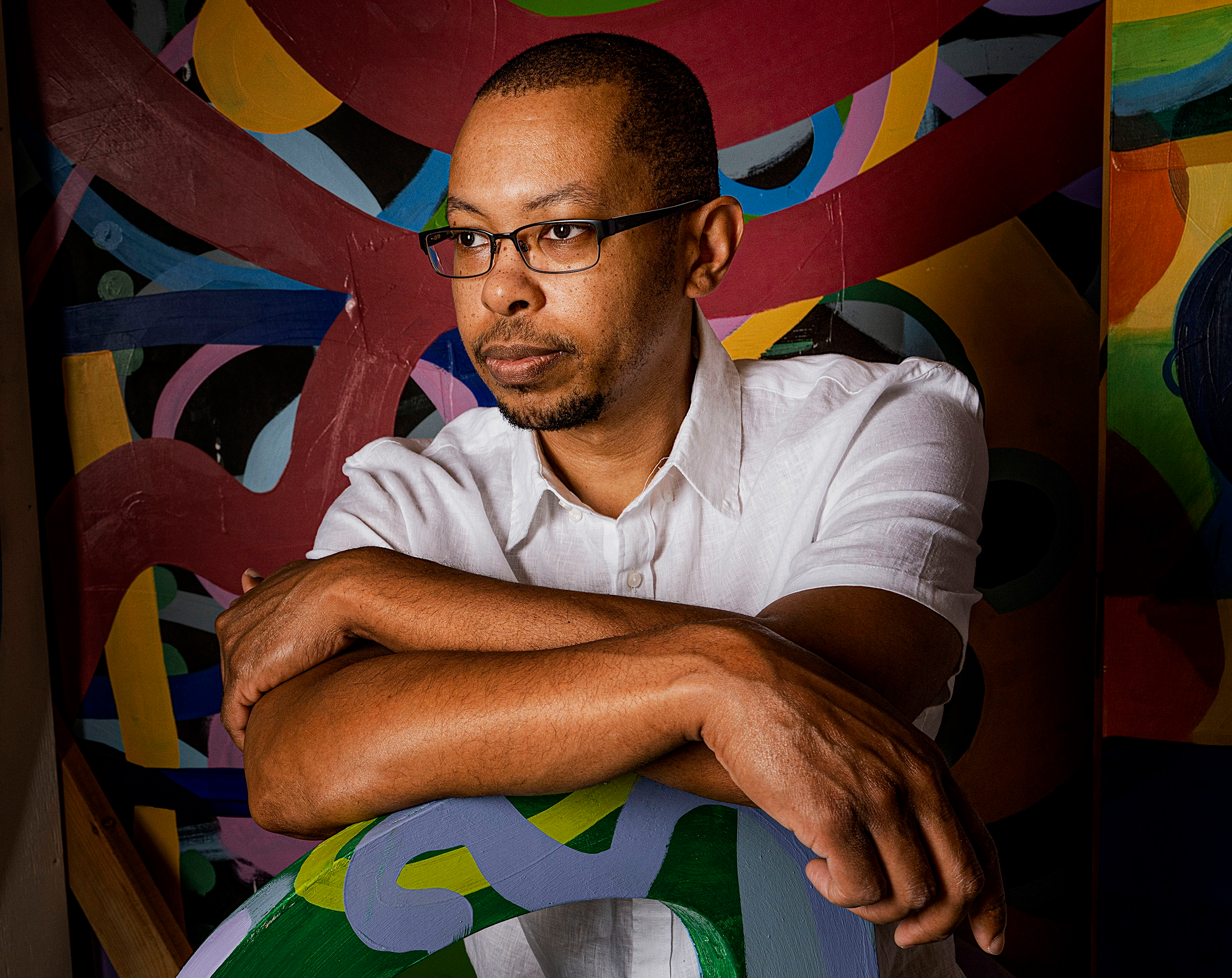 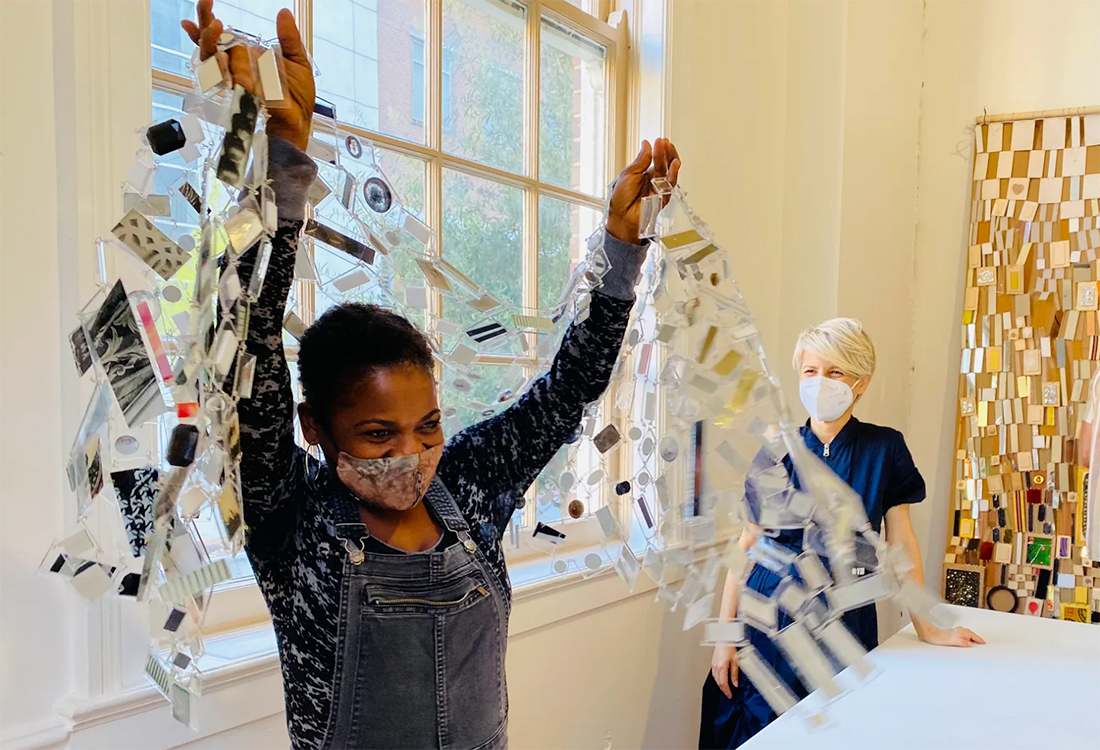