In-person restaurant dining is currently banned in the City of Atlanta, but plenty of Midtown restaurants are pivoting with to-go and curbside service as they navigate tough times.

The COVID-19 pandemic is changing the way all companies do business, at least temporarily, but the restaurant industry is likely making the hardest adjustments of all in order to flatten the curve and keep their staff and customers safe.

In late-March, Atlanta Mayor Keisha Lance Bottoms issued an executive order that banned restaurants and bars from patrons dining in, but it is still permissible to order food to-go, pick it up curbside or have it delivered. Soon after, it was announced that restaurants could temporarily serve beer and wine to go — though state law prohibits these beverages from being delivered by services like GrubHub and UberEats.

Several Midtown restaurant owners weighed in on how things are going, and all agreed that times are tough, with business down as much as 90 percent.

“People are scared,” said Eddie Johnson, owner of Publik Draft House, which opened next to The Fox Theatre in 2009. “There’s a lot of fear of coming into contact, and business has been trickling.”

“You never know what’s going to happen,” said Kay Masri, owner of Olive Bistro. “When you listen to the news and hear the president say some restaurants are going to close, it really hits home.”

Tony Appie, general manager at 26 Thai Kitchen and Bar, said the restaurant has been forced to lay off a lot of wait staff, and he is working on filing unemployment to get them the money to make it through these hard times. His restaurant opened just a few months ago in Midtown, and navigating through a pandemic was the last thing he and co-owner Niki Pattharakositkul ever expected.

“Things were going great,” Appie said. “We were doing better than we even anticipated doing from the get-go. Around January the word was out, and we were seeing so much support from our community. On any given day, business was probably 80 percent members of the community walking over on foot.”

Masri said Olive Bistro was also hitting its groove in Midtown after relocating from Ponce de Leon to Juniper Street last year. She and her staff quickly pivoted to curbside and delivery service and started practicing social distancing efforts, with just one employee working in the kitchen and one in the dining room per shift. The restaurant also offers paperless online ordering and touchless credit card machines. 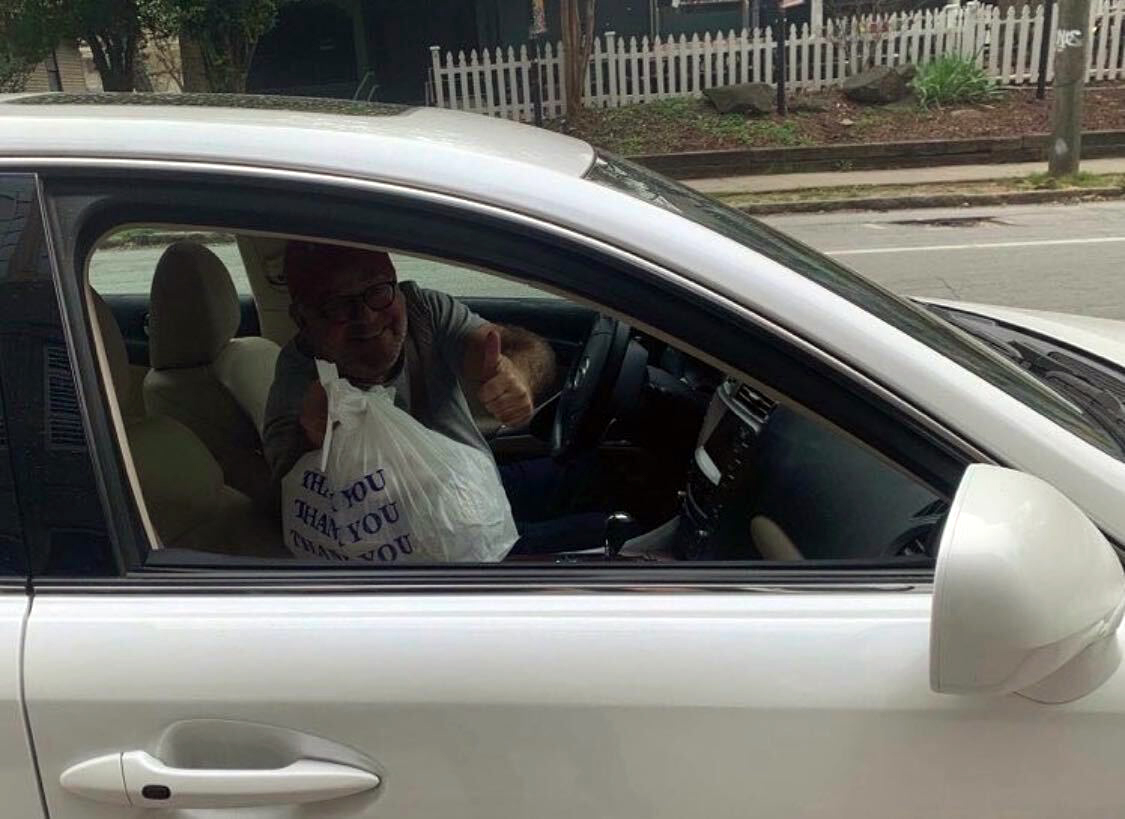 A happy customer picks up food from Olive Bistro.

“Everyone wears gloves and sanitizes constantly,” she said. “We go above and beyond to keep things clean.”

Several restaurants, including Cafe intermezzo and Blue India, initially closed completely and then decided to reopen with slimmed down take-out menus.

“When we closed down just before the mayor’s order, business was very dead, and it just didn’t make financial sense to stay open,” said Blue India Owner Jiggar Patel. “But we felt with a lot of our delivery partners offering zero delivery fees, it would be a good idea to give our employees some hours so I can keep paying them. Everyone is struggling right now.”

Many restaurants have been forced to lay off employees or open GoFundMe campaigns to try to supplement their servers’ income. See a list of resources to help service industry workers on our website here and consider making a contribution today. 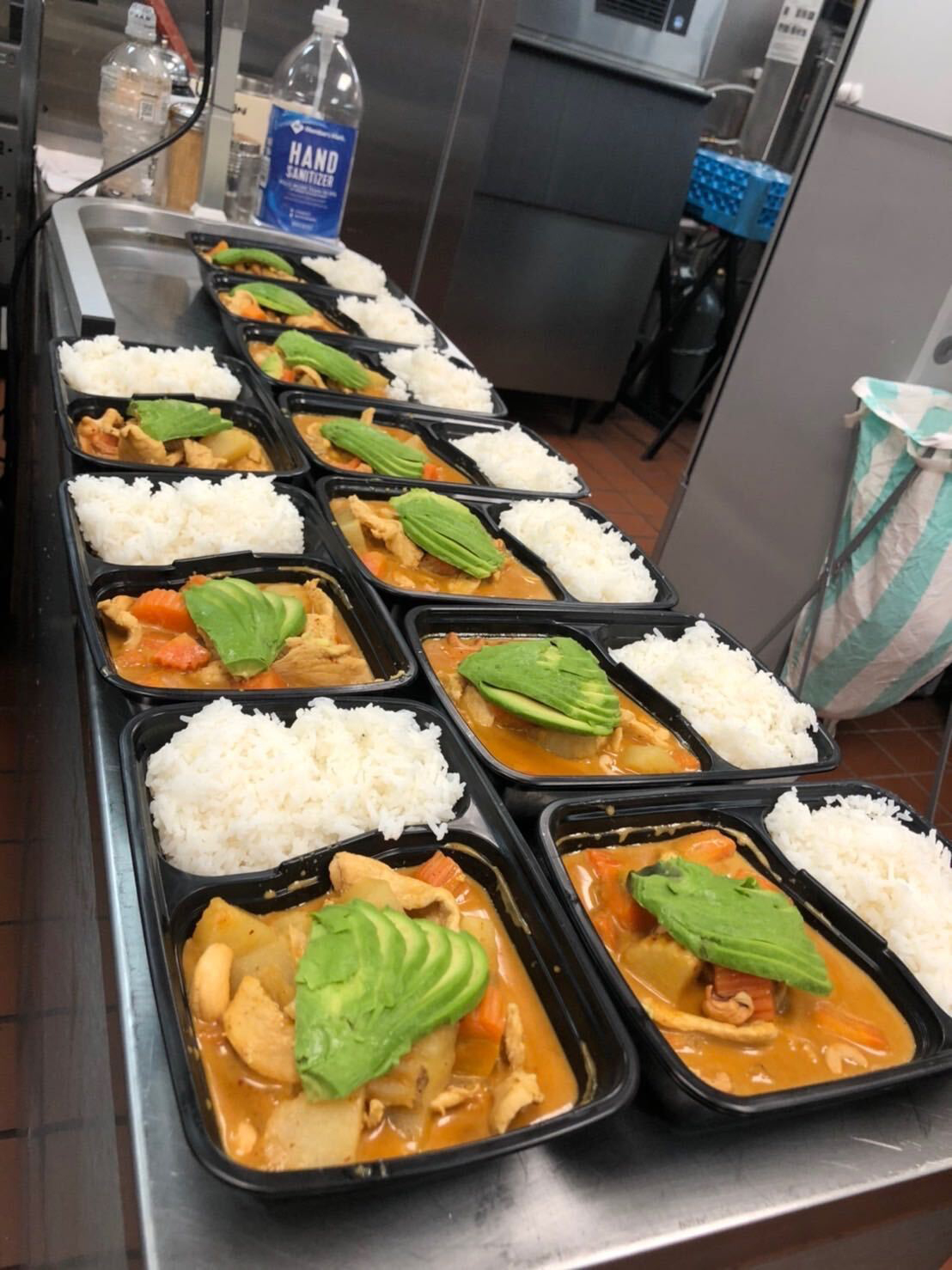 26 Thai orders packaged to go near a sanitizing station for employees.

Johnson said most of the business Publik is currently seeing comes from members of the Midtown community, which he said “has been very supportive.”

“I appreciate being here and striving,” he said. “It will be a trying time for the next couple of months, but I’ll hang in here.”

The owners are bracing for a tough few months, but there are a few bright spots in their day, like when regulars stop by for a take-out order and offer a few words of encouragement.

“You really get the feeling from customers here that they want us to make it just as bad as we do,” Appie said. 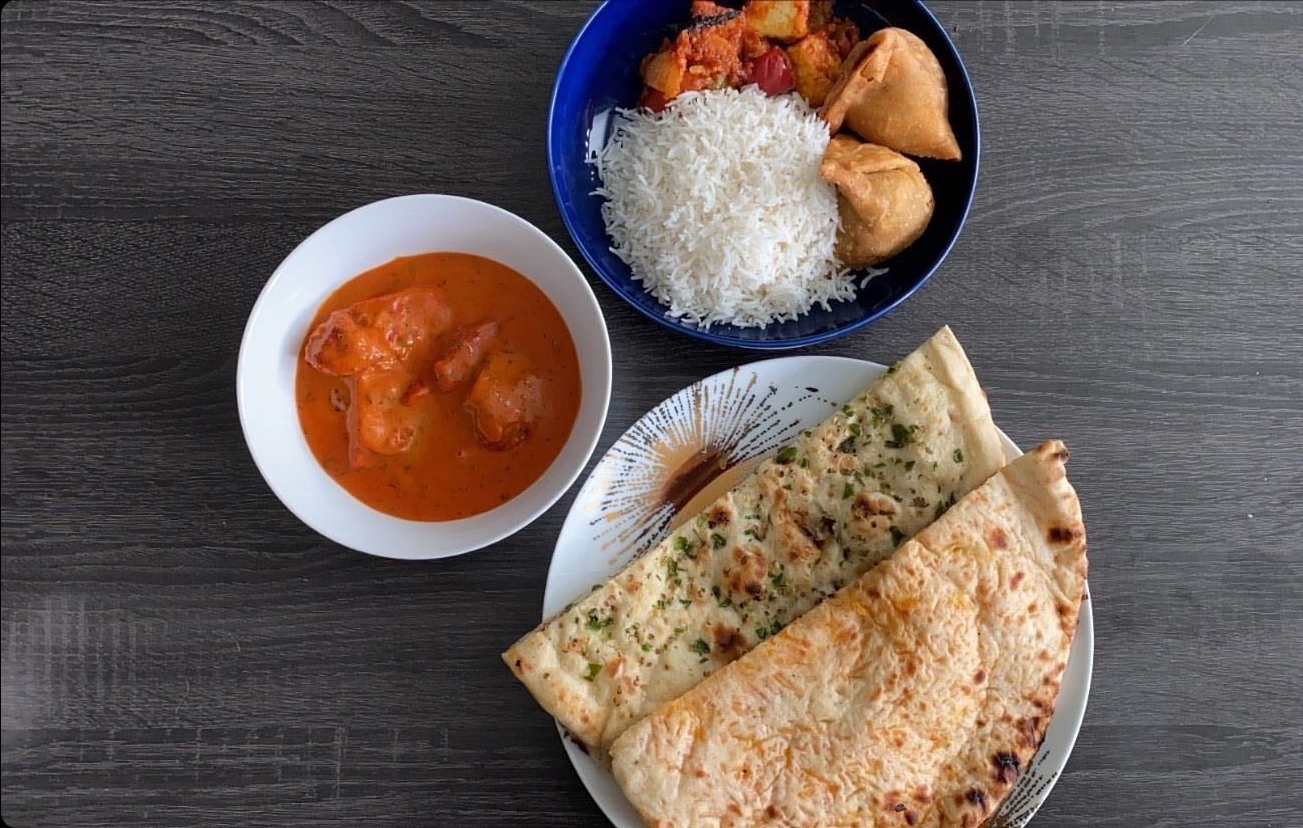 An order from Blue India plated to perfection by a customer.

Masri said she knows the community will come back stronger than ever before.

“If we have to go through this, Midtown is the place to be,” she said.

Midtown Alliance’s membership team is in contact every day with local restaurants to check in and look for ways to help. Since mid-March, when we started a special online directory of area restaurants that are open and doing takeout/delivery, it has become the most-visited page on our website. 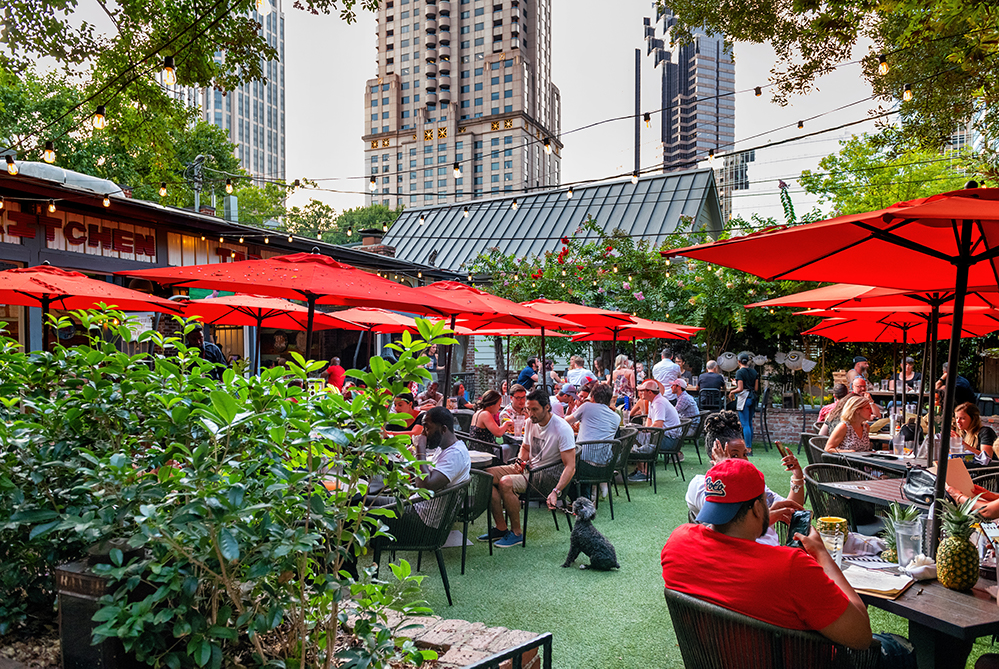 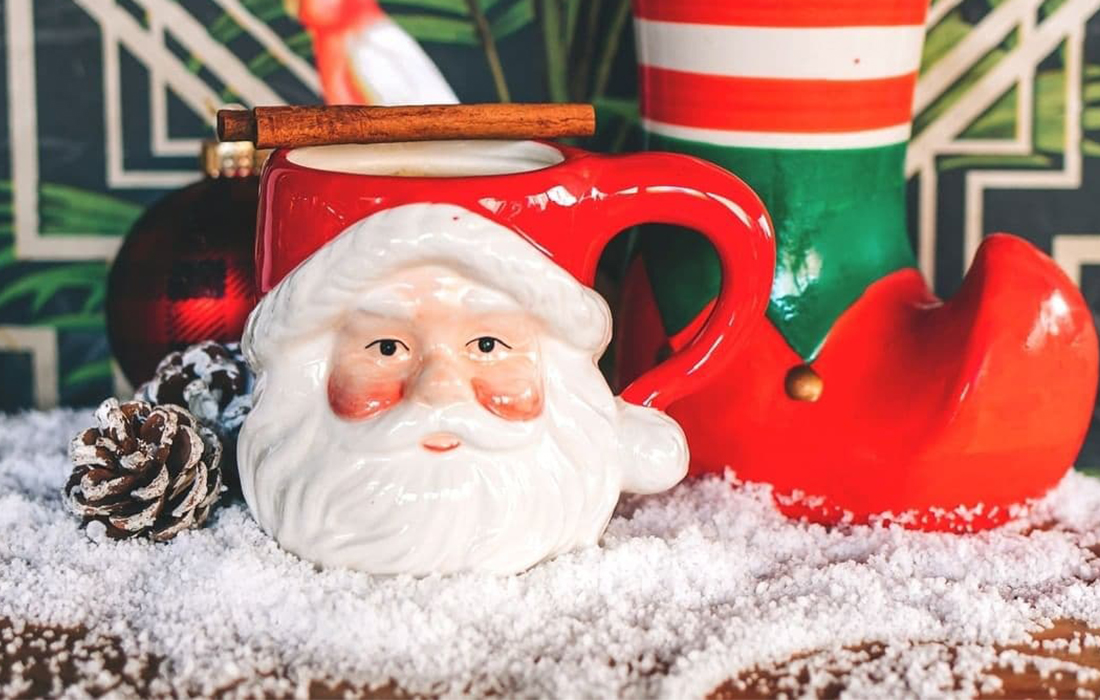 Have a Cup of Cheer in Midtown
If you’re looking for a place to spend a socially distanced evening out, there are several holiday pop-ups around Midtown to add to your list. Their themes range from winter wonderland to the tropics to your favorite 90s Christmas movie, and you can explore them all within our 1.2 square mile district.

Colony Square Gears Up for 2021 Grand Reopening With New Restaurants, Theatre
The reimagining of Colony Square is taking shape, with new restaurant and retail signs beginning to blink on and major office tenants moving in. The project's grand reopening is slated for spring 2021.