Construction fencing, non-conforming sidewalks and closures among biggest issues for the visually impaired.

Midtown Atlanta has 120 blocks laid out in a neat grid system and is considered one of the city’s most walkable neighborhoods, but not everyone navigates these streets in the same ways.

In celebration of the Americans with Disabilities Act turning 30 this year, we’re talking with district workers and residents whose experiences can help us improve our transportation network.

This month, we spoke to Adam Hinchliffe, Executive Affairs Manager at the Center for the Visually Impaired, which is based in Midtown. In addition to the ADA’s anniversary, CVI is celebrating White Cane Awareness Day this month, a day set aside to honor the achievements of people who are blind or visually impaired and the important symbol of blindness and tool of independence, the white cane.

Although Hinchliffe is currently working remotely due to COVID-19, he typically lives Downtown in the Fairlie-Poplar District and commutes via MARTA to work at CVI, which is located on West Peachtree. He told us what it’s like for him to use the rail system to get to work, why he loves Midtown and where our sidewalks could do better for users like him.

Helping Others Live Life to the Fullest

Hinchliffe has Retinitis Pigmentosa, a rare, progressive disorder that causes a breakdown and loss of cells in the retina. As his sight began to decline around 2005, he knew he needed to get in touch with CVI, and accept that he was losing his vision.

“I went to CVI for training, to learn how to use a white cane and use assisted technology, once I was no longer able to read text or computers,” Hinchliffe said.

When his vision loss began to make it difficult to keep up with his graduate studies at Georgia State University, he decided he wanted to have a more permanent relationship with the center so he could help other people to accept and manage their visual impairments. He began by volunteering on committees, and eventually joined CVI’s staff in 2017.

“CVI is like a family,” he said. “It’s a multi-decade, lifelong partnership and it really becomes a part of who you are as an individual.”

His role at the center includes serving on the City of Atlanta’s Task Force For Accessibility and Inclusion, fundraising and outreach to potential clients by letting eye doctor practice groups know about services available from CVI. Due to the pandemic, many of the Center’s services are being offered remotely, while others, like teaching people how to use a white cane, are still happening in person out of necessity. Over the past fiscal year, the Center has helped more than 950 people.

“We know there are hundreds of thousands of metro Atlantans with varying degrees of vision loss,” Hinchliffe said. “Low vision and vision loss are scary propositions to face alone. One of the things I’m proud to say I do is to help others live their lives to the fullest with independent dignity.”

A Foundation for Teaching and Mobility

Even before his eyesight declined, Hinchliffe has always enjoyed the hustle and bustle of cities and taking transit where he needs to go rather than driving. To get to CVI, he takes MARTA from the Peachtree Center Station to North Avenue.

MARTA stations have several features that help people with low vision, including:

“The trains on the Red and Gold Lines are frequent, and you can catch a train in a lot less time than sitting in traffic,” Hinchliffe said.

Hinchliffe walks from North Ave. to CVI's offices at West Peachtree and 4th Streets, and the Center also uses Midtown’s grid system as a proving ground to train its clients.

“Midtown is a very pedestrian-friendly area,” he said. “That’s a major selling point not only for people who want to work in Midtown, but also a wonderful foundation for teaching and mobility. You can interact with infrastructure that’s really made for access. It’s really beneficial to us who are blind or visually impaired; we can visualize angles to know where things are.”

Creating a mental map is a critical part of navigating for the visually impaired, and when something unexpected blocks a path, it can be more than an inconvenience — it can create real danger.

“Midtown is wonderful if you’re sighted, but if you’re not sighted it varies,” Hinchliffe said. “A major concern I have, that all community improvement districts have, is inconsistent sidewalks. Coming from a blind point of view, varying sidewalks pose a challenge.”

When a curb cut on one side of an intersection did not line up with the one on the other side, Hinchliffe recently misinterpreted low curbing for sidewalk and found himself walking up the street instead. If another pedestrian had not guided him back to the sidewalk, he could have been seriously injured.

“Developers often want to meet an individual block’s needs as opposed to thinking of a block as a corridor,” Hinchliffe said. “We need to think about how the sidewalk blends with the street around it to make it accessible.”

“Seemingly minor design decisions can have big impacts on how people with visual impairments navigate our streets and sidewalks,” said Dan Hourigan, Midtown Alliance Director of Transportation and Sustainability. “We make every effort to follow design guidelines that conform to the ADA, but there are clearly opportunities in our own right-of-way projects and through the development review process where we can achieve even more. We’re lucky to have such a great resource in CVI right in the heart of our district.”

“Midtown, especially southern Midtown around the West Peachtree corridor, is under so much construction,” he said. “It’s so exciting seeing it developed into a true urban corridor instead of just a speedy way to get to I-85, but it often causes issues on the sidewalks.” 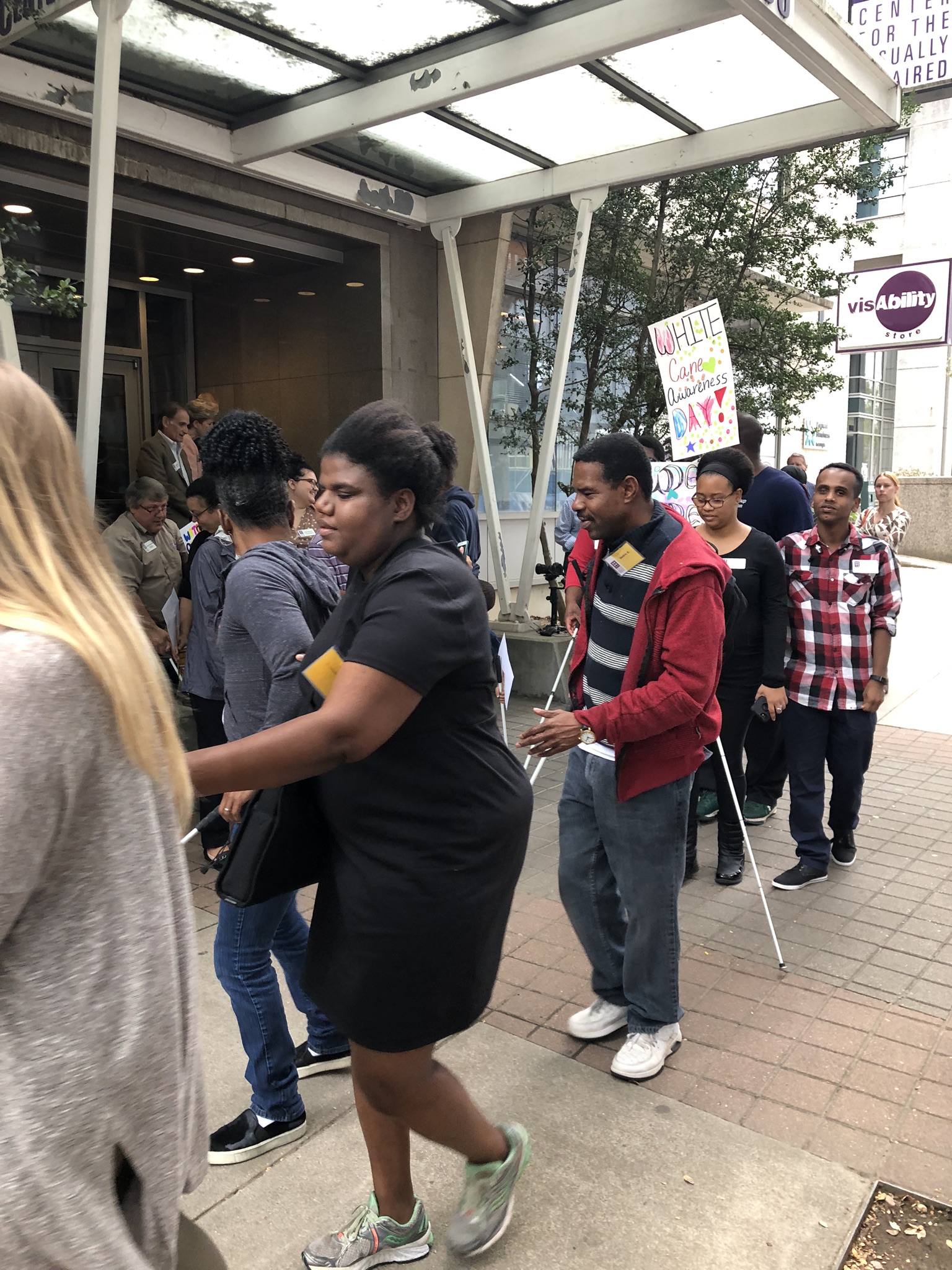 Last year, CVI clients of all ages gathered outside the Center to hear Atlanta City Councilmember Amir Farokhi issue a proclamation that October 15 is White Cane Safety Awareness Day before marching around the block in Midtown with colorful signs. Watch this video recap about White Cane Awareness Day and Midtown's transportation network here:

This year’s White Cane Safety Awareness Day will look a little different, but the Center still plans to celebrate virtually.

“This day is a recognition by the broader society of the importance of accessible pedestrian infrastructure, making sure sidewalks are maintained and follow ADA compliance rules,” Hinchliffe said. “It’s also to help sighted people learn how to get involved.”

Learn about the importance of the white cane for people who are blind and visually impaired by following CVI on their social media accounts – Facebook, Instagram, Twitter and LinkedIn. If you’d like to make a gift to help people who need free or discounted white canes or other support to gain the skills they need to continue living with self-confidence and independence, click here.

This is the second installment in Midtown Alliance’s series celebrating the 30th anniversary of the Americans with Disabilities Act. Read our first installment here about Midtown resident Carden Wyckoff's experiences with navigating the district in a wheelchair.