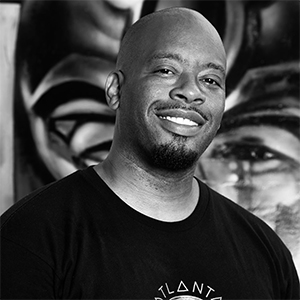 Fabian Williams is a visual and performance artist whose work explores themes of liberation, innovation and joy despite systemic racism and oppressive forces at play in Black American life. Fayetteville, NC-born and Atlanta-based, Williams employs a broad scope of source material -- commercial illustration, classic portraiture, hip hop and civil rights iconography -- to directly confront issues of race and society’s consumption and appropriation of every facet of Black culture. In much of his work, Williams often idealizes the normalization of Blackness and Black life, inspired by the realism of Caravaggio and Norman Rockwell’s depictions of Americana with a lense informed by racial, political and socially relevant contemporary themes.

Fabian has been featured in The Guardian, BBC, L.A. Times, New York Times, Playboy, Atlanta Journal Constitution, SB Nation, Bloomberg, The Root and various media outlets for his bold work and activism. Before he became a full time artist, he worked as a lowly designer and/or hard-hearted art director in the advertising industry for such brands as Nike, American Express, Pennzoil, and Verizon where he learned the dark arts of persuasion. He co-created the #Kaeperbowl mural campaign during Super Bowl 53 and is currently involved in the Big Facts Small Acts campaign to engage with black and brown communities on how to stay healthy during the pandemic.