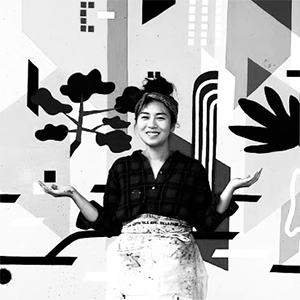 Kaye Lee Patton is a multidisciplinary artist, graphic designer and an educator. Born in Seoul, South Korea as Lee Ko Won, she moved to the United States at the age of twelve, legally changing her name to Kaye Lee Patton. Patton is interested in the idea of transience and identity in relation to history, geography, and transfer of information.

Patton lived and worked as a branding and packaging designer in Chicago before moving to Atlanta to complete her MFA in painting from Savannah College of Art and Design. Her career as a graphic designer highly influences her work, as evident in the use of graphic shapes, typography and digital images in her paintings, installations, as well as her public murals.

Her exhibits include Gathered: Georgia Artists Selecting Georgia Artists 2015 at The Museum of Contemporary Art of Georgia (MOCA GA); WAP Apprentice Exhibition, MOCA GA, and other various group and solo shows in Atlanta. Patton participated in Hambidge Hive at Colony Square Atlanta as part of MINT selected artist. She has also completed a mural titled “essscape” through The Shops Buckhead ATL and other public murals around Atlanta including her involvement with Stacks Squares and Forward Warrior.