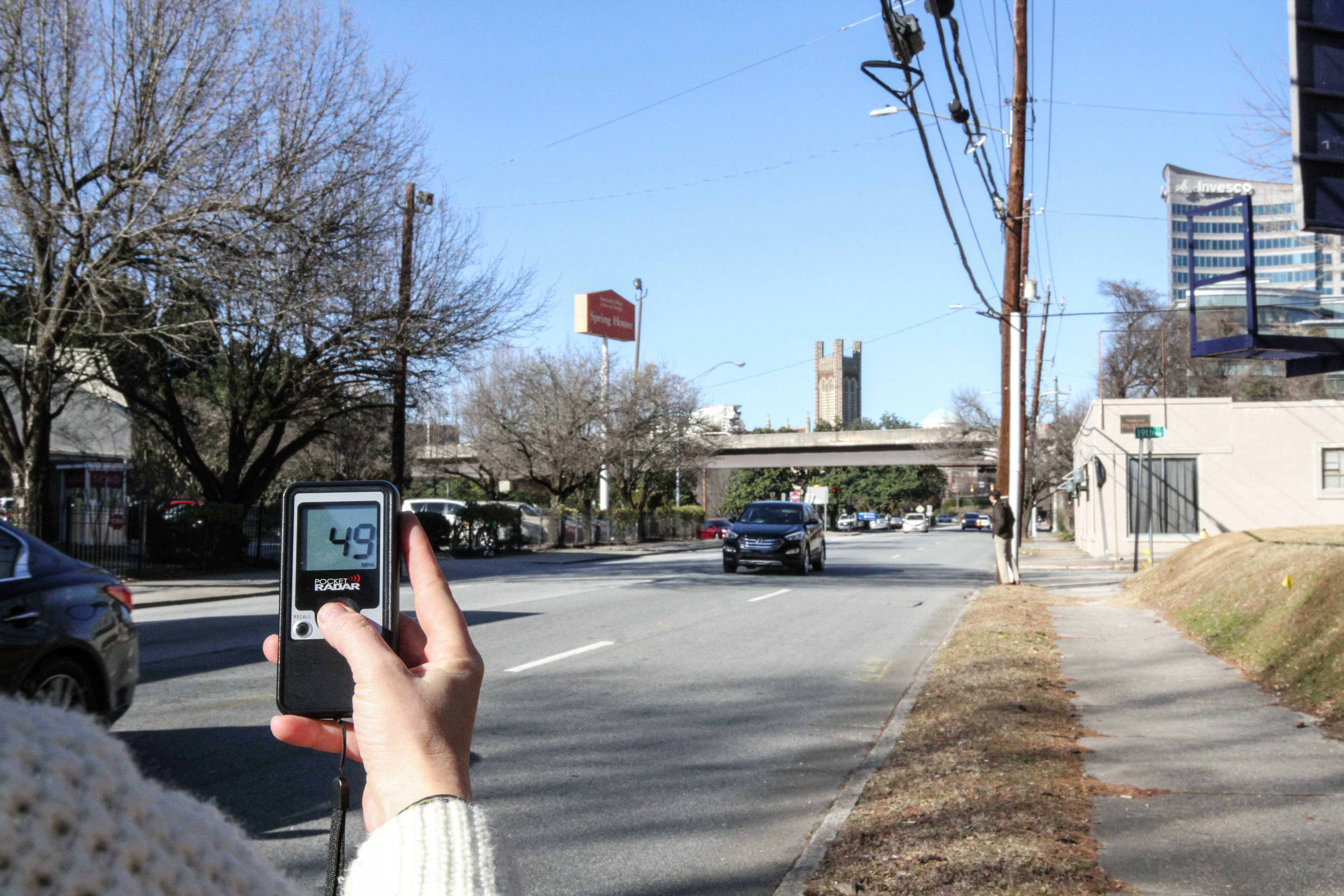 After years of planning, the City of Atlanta is implementing a Vision Zero policy to reduce traffic deaths, serious injuries and crashes.

The new legislation includes a citywide ordinance lowering the default speed limit on Atlanta roads to 25 miles per hour. In 2019, speed contributed to 54 percent of the 73 traffic fatalities recorded. 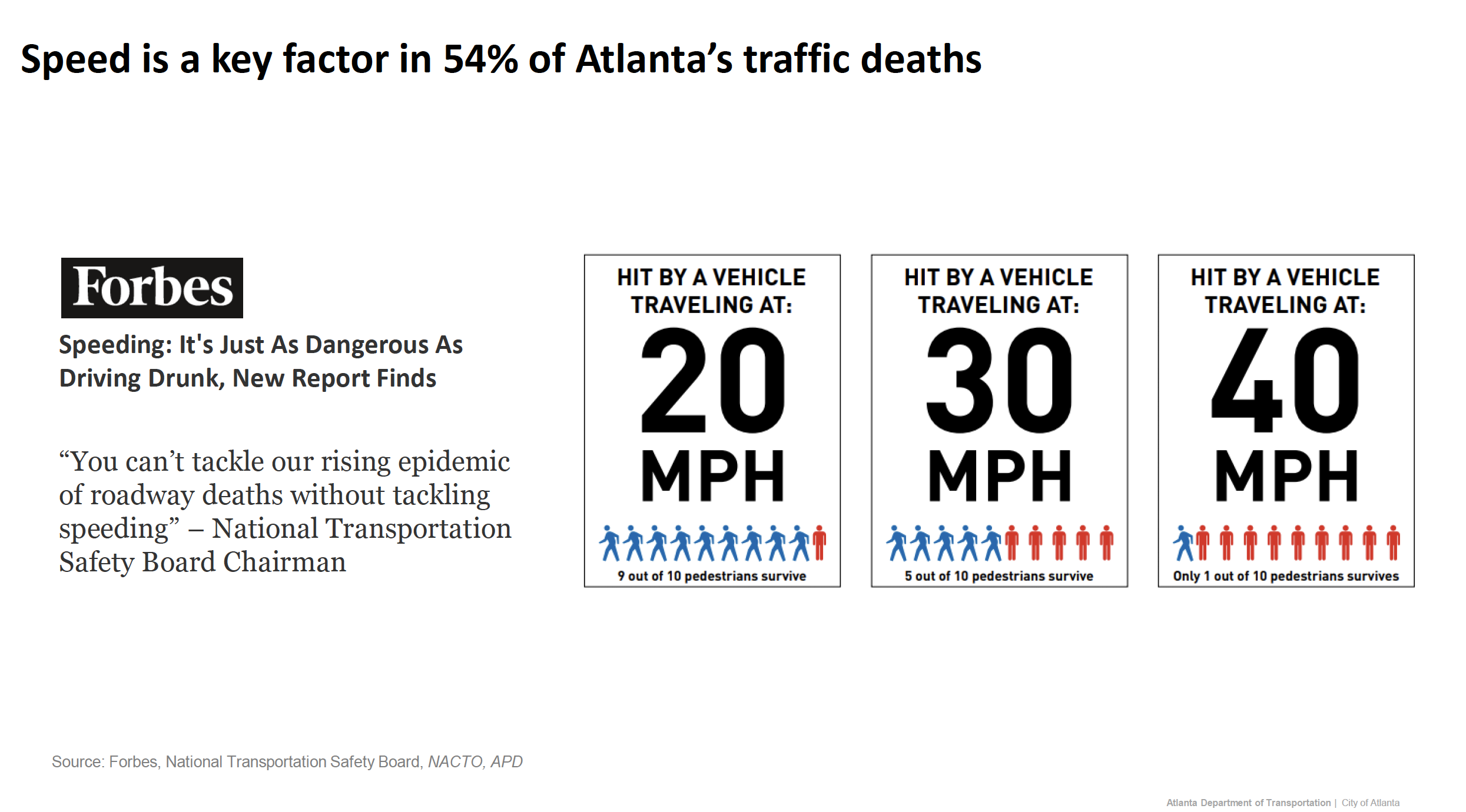 “We envision Atlanta’s transportation network to be one where everyone can travel wherever they need to go safely, reliably and efficiently whether they are traveling on our roads, sidewalks, bike lanes or transit system.”

Cities across the world, including more than 40 U.S. cities, already have adopted Vision Zero policies. Midtown Alliance has advocated for implementing these policy measures since developing its Midtown Transportation Plan. The plan, started in 2015 and developed over 18 months with input from thousands of Midtown workers and residents, is the district’s largest-ever transportation planning effort.

Vision Zero was one of the major themes of the 2018 Midtown Alliance Annual Meeting. Keynote speaker Janette Sadik-Khan, former commissioner of the New York City Department of Transportation and author of the acclaimed book Streetfight, challenged attendees to rethink the function of streets and implement data-driven strategies to measure the conditions of a successful street.

“With analysis and leadership, crashes can be predicted and they can be prevented,” said Sadik-Khan, whose work as NYC DOT commissioner included successfully closing part of Times Square to automobile traffic. “Setting a goal is really the key. You’re seeing mayors now recognize that, building on it and moving toward Vision Zero, and I think that is so important.”

Doug Nagy, Deputy Commissioner of Strategy at the City of Atlanta’s Department of City Planning, said Vision Zero has proven to be an effective approach in other cities in reducing traffic injuries and deaths.

“Compared to other cities, Atlanta has an extremely high death traffic death rate,” Nagy said. “Last year, we lost 73 Atlantans and others, and we believe all of these deaths could have been prevented.” 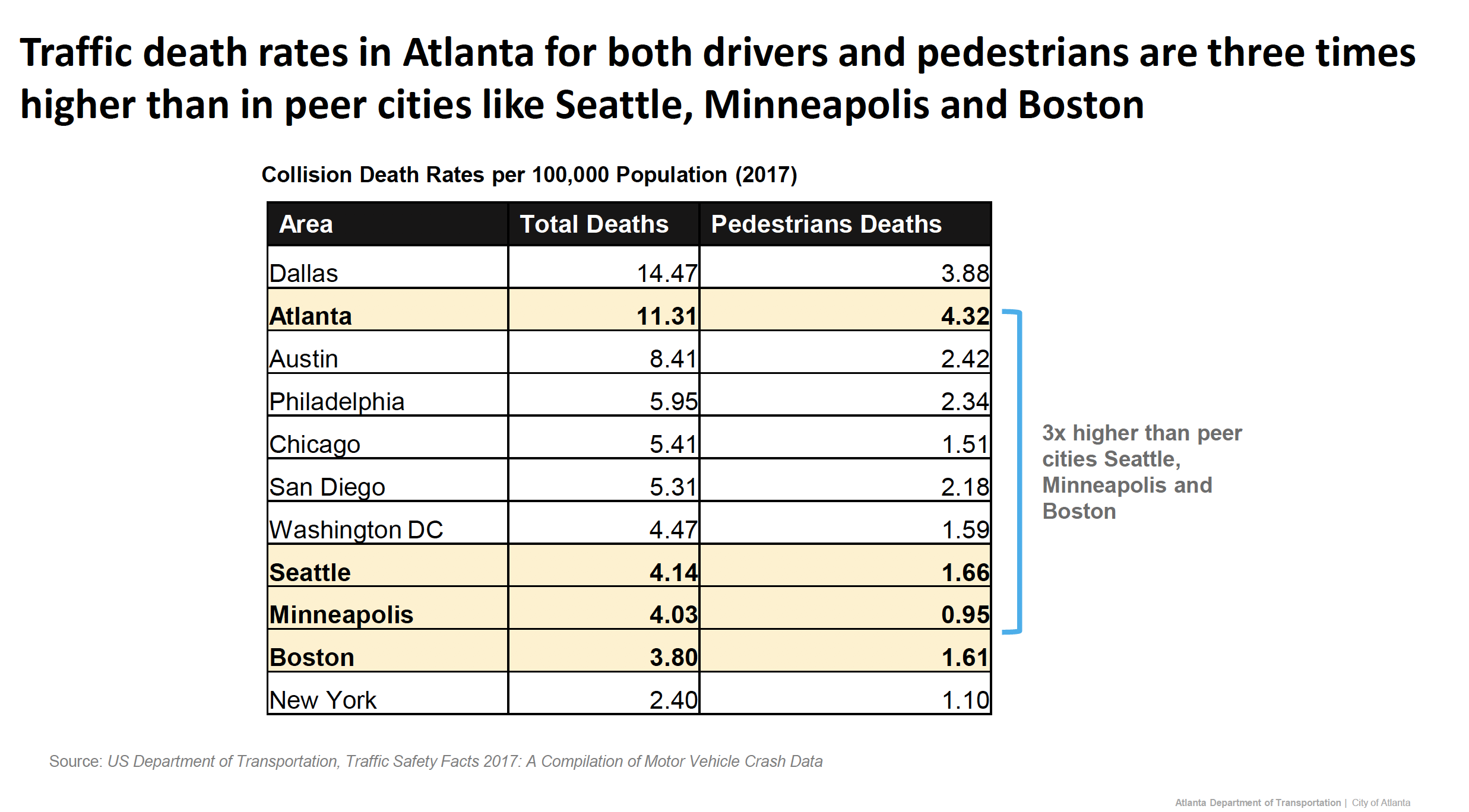 “The city has put a stake in the ground by developing a Vision Zero policy, indicating that it is serious about transportation safety,” said Dan Hourigan, director of transportation at Midtown Alliance. “We’re thrilled that the city has taken this important and necessary step.”

The city’s Vision Zero policy is a part of Mayor Keisha Lance Bottoms’ One Atlanta Strategic Transportation Plan that was announced last November. That month, the city also established the Atlanta Department of Transportation and named Josh Rowan its commissioner.

Nagy said the City of Atlanta has already started to implement Vision Zero policies, including lowering the speed limit on city roads. Under ATLDOT’s direction, a Vision Zero Task Force made up of stakeholder groups like members of the state transportation department and enforcement agencies will develop a comprehensive Vision Zero Action Plan identifying data-driven strategies and actions to achieve a goal of zero fatalities and foster a greater sense of understanding about the city’s streets.

“We are here to help,” Hourigan said. “We will continue to provide the city with data that we collect and ensure that the projects we implement meet the goals of the city's forthcoming Vision Zero plan. Most of what we already do supports Vision Zero, from encouraging commuters and residents to embrace transit, biking and walking to building out LIT lanes and adding traffic signals and crosswalks at unsignalized intersections.”

Before the official announcement of Vision Zero, the city kicked off Mayor Bottom’s Action Plan For Safer Streets, a two-year, $5 million plan to bring accelerated safety redesigns to 20 city corridors to improve safety. Last October, the city, Midtown Alliance and volunteers built Atlanta’s first temporary bike lane in Midtown, and soon Nagy says construction is set to begin on a permanent protected bike lane on Spring Street that will serve as a critical link between Georgia Tech’s community housing and campus.

“There’s an important lifestyle benefit to the program as well,” Nagy said. “It’s about shifting Atlanta to a place where everyone feels safe walking around, scooting, biking and driving in the city.”

Oslo, Norway proved Vision Zero is possible in 2019 by bringing its number of cyclist and pedestrian fatalities down to zero — but it took years of dedication to the policy to meet its goal, and Nagy emphasized Atlanta’s Vision Zero policy will also be a long term commitment.

“Some solutions are quicker to implement, like lowering speed limits,” Nagy said. “But redesigning and re-engineering lots of our streets will be more capital intensive.”