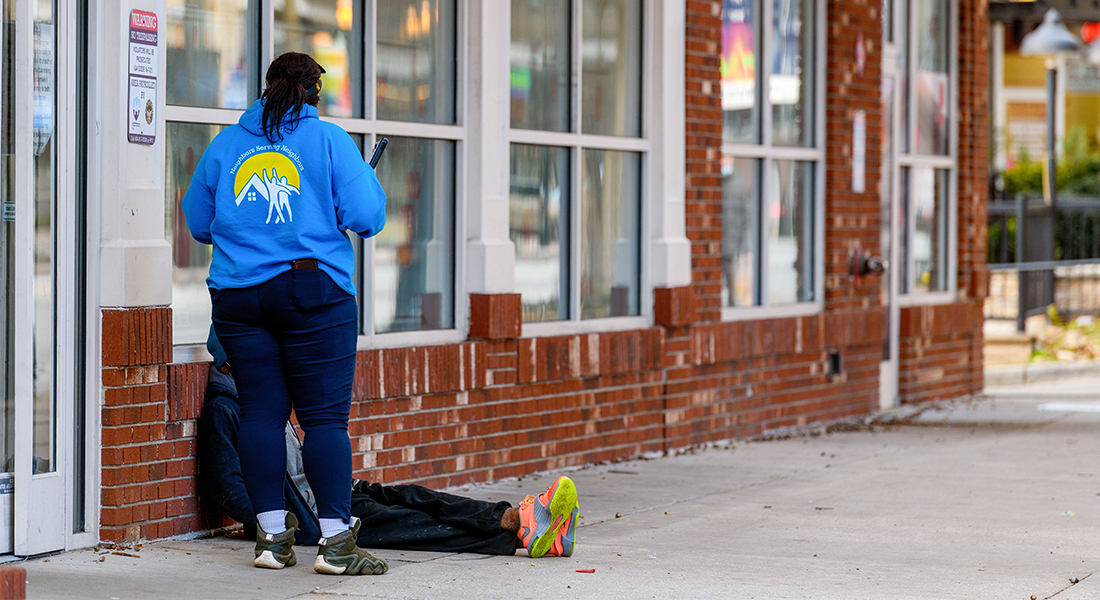 Editor’s note: This story is the latest in an ongoing series on the issue of homelessness in Midtown.

Did you know it takes an average of 9+ encounters with a person experiencing homelessness before enough trust is established for them to accept help?

There are many reasons unsheltered individuals will decline offers to stay in shelters or support services: Shelters have strict curfews and limits on possessions. The queue for permanent housing can take over a year. Or, a case worker they’ve interacted with in the past has promised them something and hasn’t followed through. 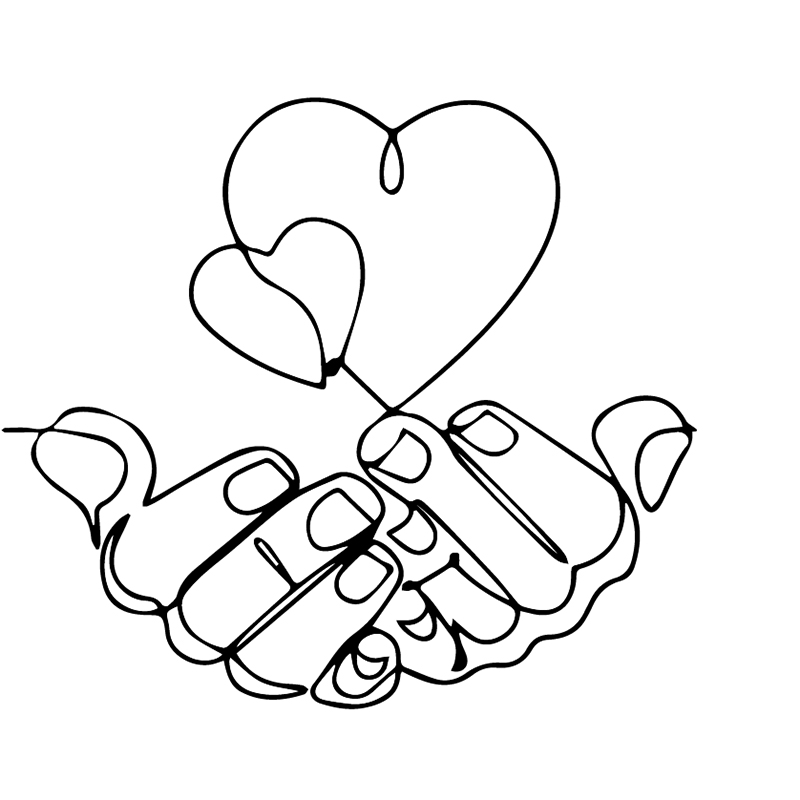 A pilot partnership between Midtown Alliance and Intown Collaborative Ministries (ICM), a nonprofit whose mission is to prevent and reverse homelessness and hunger, looks to solve this issue by funding a full-time case worker in the district.

Lillian King-Thompson, ICM’s Midtown case manager, focuses daily on reaching those our Midtown Blue homeless outreach program has not been able to help in the past. ICM has an established housing-first model that also addresses barriers to stable housing such as lack of income, insufficient governmental identification, mental health disorders, drug addiction and criminal records.

We spoke with King-Thompson about how she approaches potential clients and why homeless outreach is her calling.

The Foundation Midtown Blue Has Built

Midtown Blue first formalized and launched its homeless outreach program in the district about five years ago. Public Safety Officer (PSO) Sgt. Kristian McClendon built the program from scratch after researching similar programs and visiting homeless shelters across the city. Since then, PSOs have conducted early morning welfare checks on the streets of Midtown, asking people who appear to be sleeping outside if they need assistance and offering to connect them to organizations like Intown Collaborative Ministries who can get them into the City’s housing queue. 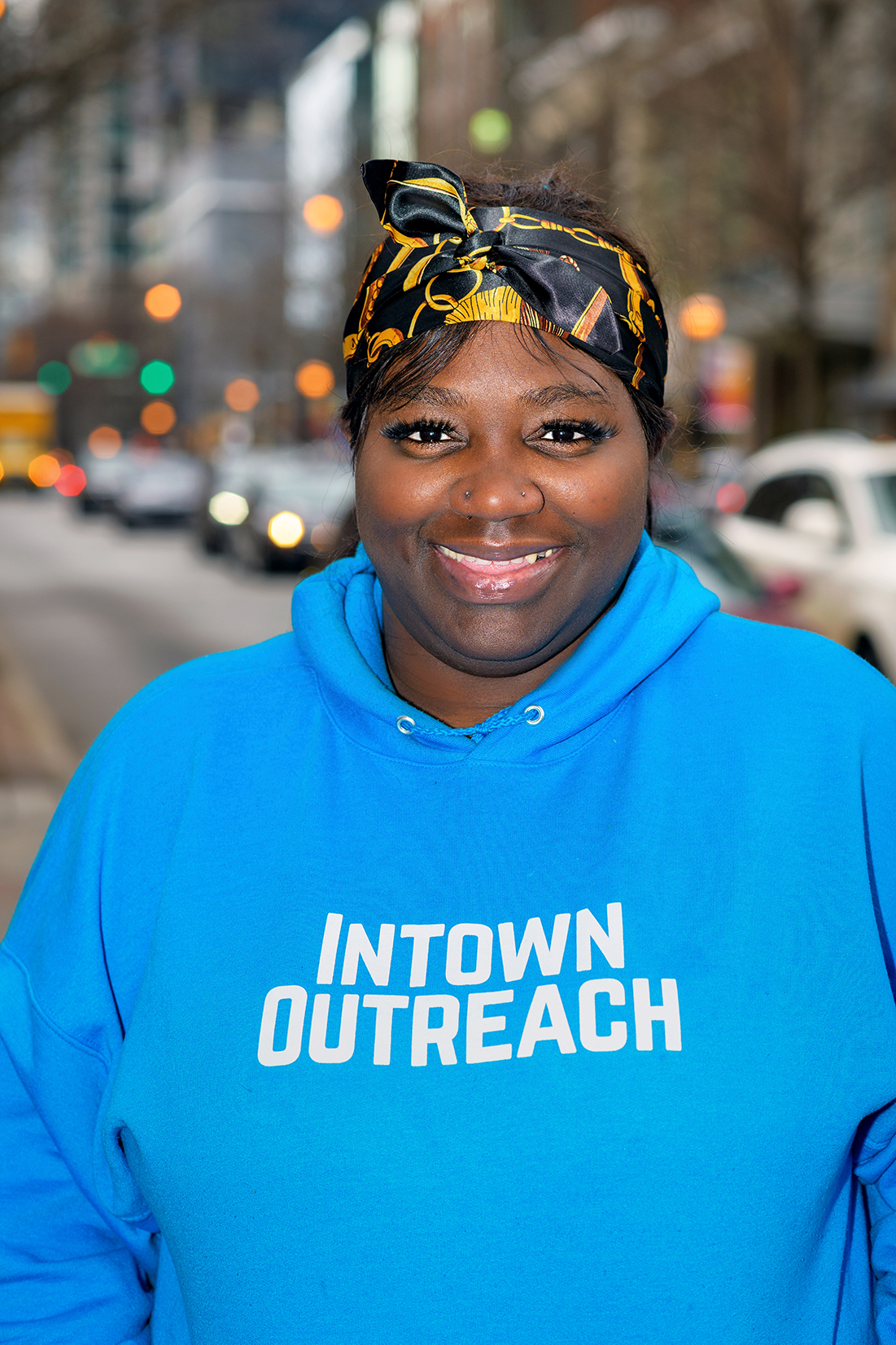 The Next Layer of Support: Meet Lillian King-Thompson

Investing in a full-time case worker at ICM who will work daily with Midtown Blue personnel carries the immediate potential to improve the lives of people in need.

Thompson-King moved to Atlanta from New York City in November 2020 to accept a position at ICM. She’d been an outreach specialist for BRC, the largest homeless outreach organization in New York, where she worked in all five boroughs.

“I see similarities and I see differences between New York and Georgia,” she said. “New York has so many more homeless individuals we see on a daily basis, and that has a lot to do with the funding that goes to New York. There’s a lot of income coming in and a lot of organizations funding a lot of different things.” 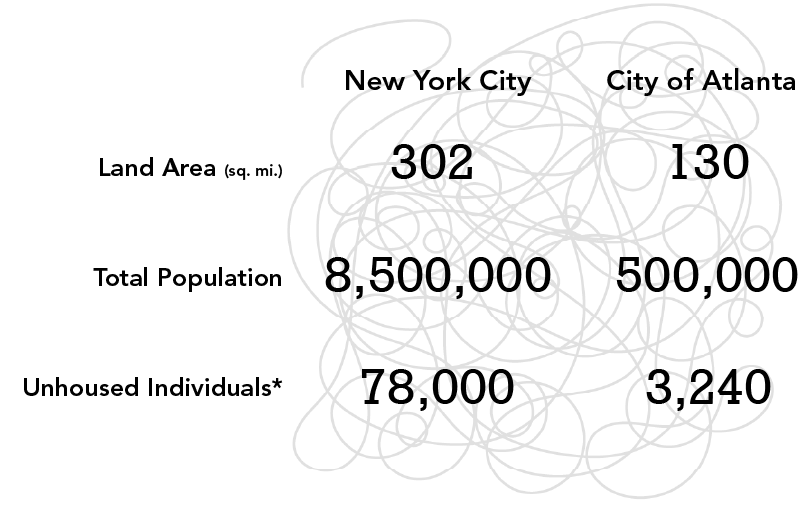 *The Point-in-Time Count to tally the number of unhoused individuals in cities takes place every January by requirement of the U.S. Department of Housing and Urban Development (HUD). Note: the 2021 effort was canceled due to the Covid-19 pandemic.

When she started her new job at ICM, King-Thompson worked mostly in the Downtown Atlanta area, which had more encampments than what she was used to in New York City. When the opportunity arose to apply for a position working solely in Midtown, she took it because it mirrored what she liked most about her old job: walking through city streets, interacting with people one-on-one.

Being a case worker comes naturally to King-Thompson, who has been a caretaker from a young age.

When King-Thompson was 12, her mom was diagnosed with multiple sclerosis (MS), a progressive nerve disease with symptoms that include vision loss, pain, fatigue and impaired coordination. While her mother was still able to work, she needed care in the evenings. King-Thompson stepped into the role and thrived in it, despite her young age.

“I feel like that’s my calling, it came naturally to me,” she said. “It felt like everything was put into place for me.”

As an adult, she became a direct support professional for mentally ill adults and adolescents and then transitioned into working with the homeless population as well as mental illnesses.

“It’s not for everyone,” Thompson-King said of her field of work. “You have to have compassion and honesty. I see a lot of times people are in it for the money, and good clients get mistreated. We have to remember they’re already in a situation that knocks them down. They’re in a system that’s designed for them to fail so when we encounter them, we do it with our hearts.”

One thing King-Thompson likes about working in the field: every day is different, “like a box of chocolates.”

“You have good and bad times, in between times,” she said. “You’re dealing with different individuals going through different levels of struggling and mental illness. You just have to take it as it comes.”

The toughest days are the days when her most resistant clients refuse to accept help.

“We cannot force an individual to accept help,” she said. “We don’t want to take a person’s rights away. It’s very important to respect a person’s right to refuse services. But those are my most difficult times, when I see someone in the type of weather we’re having now and I can’t do anything for them.” 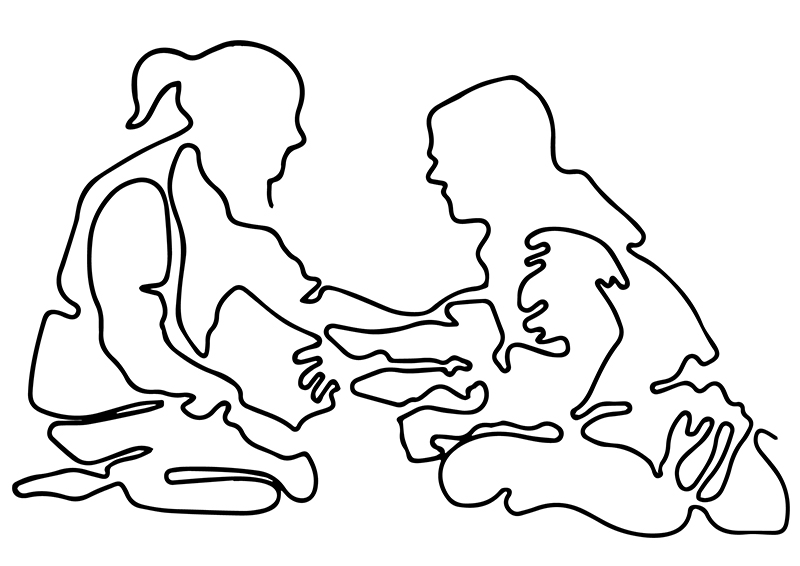 But then there are the wonderful days, when she knows someone’s life is about to change for the better.

“The most rewarding thing is seeing their success,” King-Thompson said. “Getting them into housing, or coming to them and saying, ‘hey, your housing voucher is ready. Let’s go look at apartments.’”

She recounts a few of these success stories from her career so far: a woman was able to avoid losing custody of her children by finding housing. Her team built enough trust with a man who had been living on the streets for more than a decade to get him into an apartment. For King-Thompson, any time a person goes from sleeping on the streets to finding a place to call home, that’s a success.

King-Thompson started her new role in Midtown in early January. After a brief introduction to the district from her new colleagues at Midtown Blue, she’s started making the rounds on her own.

“When I approach people, I say, “Hi, my name is Lillian, can I talk to you for a minute?’” You want that person to feel you are respecting them as an individual, that’s my go-to and it’s worked for me so far.”

She doesn’t know everyone on the streets of Midtown by name yet, but it won’t be long.

In the first year of this partnership, ICM expects King-Thompson will engage at least 40 individuals, enroll at least 25 clients, and navigate at least 15 clients to the stage where their documentation is ready to get them into the housing queue. As of Feb. 3, she had already engaged and enrolled 10 people.

For context, Midtown Blue Safety Officers recently counted around 50 people during an early morning effort to identify people who said they were experiencing homelessness in the district.

With each individual, King-Thompson starts at the beginning: by learning their names and stories, by building trust.

“I want to help as many Midtown clients that I run across as possible,” she said. “I want to see growth, to see change, to see progress being made.”

Read More from Our Investigative Series

Get to know the people, the strategies and the challenges our team has covered on Atlanta's path to untangling this complicated social issue. 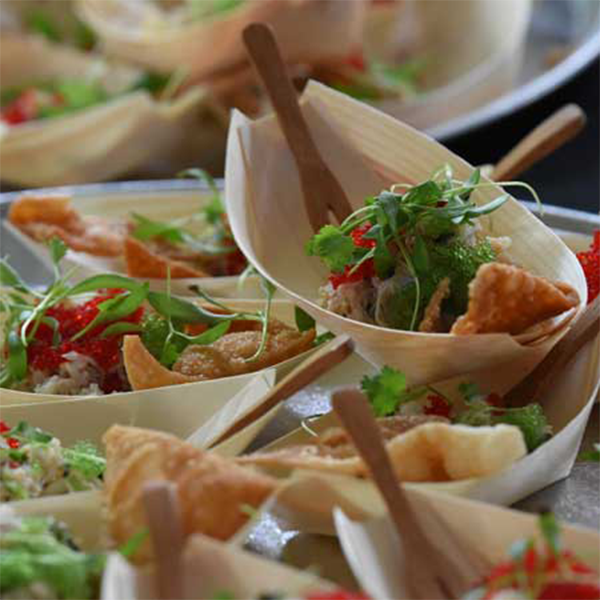 Foodie Event at Epicurean Atlanta Celebrates Local Restaurant Scene
The October 20 Midtown “Grand Tasting” event includes some exhibiting restaurants from Greater Midtown have been around for a long time. Others are newer to the scene.