Riches to Rags to Riches

Today, Midtown is a robust blend of businesses and residences, hotels, restaurants, cultural and retail destinations, greenspaces, pedestrian-friendly sidewalks and safe streets. But it wasn't always so. Indeed, what lends Midtown much of its character is its riches-to-rags-to-riches history.

In the late 1800s, the area was one of Atlanta's finest neighborhoods with graceful mansions lining Peachtree Street. The post-World War II era, however, led to a downturn as people left the city for Atlanta's growing suburbs. By the tumultuous 1960s, Midtown was best known for unsavory streets and blocks of underutilized land.

Beginning in the 1970s, urban visionaries reclaimed the neighborhood and began its renaissance. Since 1978, Midtown Alliance has facilitated Midtown's progress, transforming this part of Atlanta into a true mixed-use, new urbanist, live-learn-work-play community. Providing the framework and impetus for this phenomenal transformation has been Blueprint Midtown, the district's visionary, community-derived development plan.

Have a look at Midtown's transformation into a quality urban place across five decades and counting:

Midtown Atlanta was coming out of an era in the 1960s when it was known as the Haight-Asbury of the South. The convergence of hippies and flower children in Midtown had created a reputation that Midtown was an epicenter of counterculture, drugs and free love.

The City of Atlanta's residential population steadily declined as people migrated to the suburbs. Prurient activity moved into Midtown, with the arrival of 20+ massage parlors, adult bookstores, and bath houses. Crime increased on the streets, and the neighborhood fell into a state of neglect. 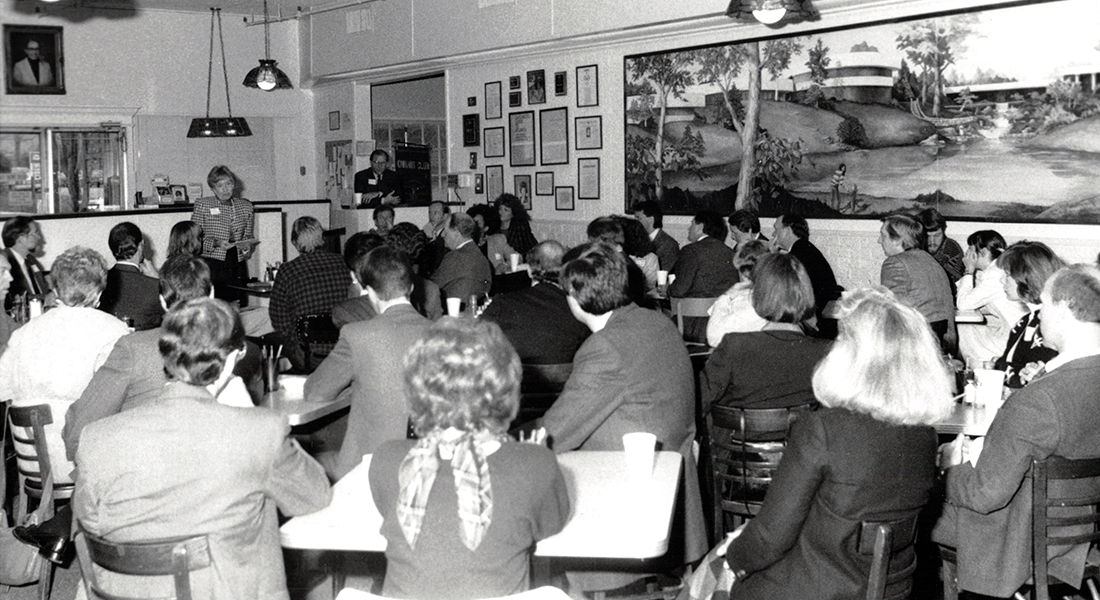 A coalition of Midtown small business leaders organized and regularly held networking meetings at Mary Mac's and Brother Juniper's. Bolstered by news that Central Atlanta Progress was advancing a plan to clean up Midtown blight, they were motivated to contribute. The group formally incorporated as the Midtown Business Association in January 1978 and established an office on Peachtree Street out of a storefront that was previously a bath house.

The original Midtown Business Association was comprised of 17 board members, representing local businesses ranging from an architectural firm and a dress shop to a photography studio and a hardware store. In addition to networking, the leadership group worked with the City to advance quality of life in Midtown, from transportation and public safety to beautification projects.

In 1979, AT&T announced it was building office projects in Midtown, which became the Midtown Business Association’s first foray into supporting a large scale economic development pitch.

The Midtown Business Association took on beautification projects, including initial efforts to turn the corner of 10th and Peachtree into a temporary pocket park with support from the landowner.

The Metropolitan Atlanta Rapid Transit Authority opened the North Avenue MARTA rail station in 1981, followed by the Midtown and Arts Center stations in 1982. The arrival of these stations made an instant impact on development patterns and sparked a wave of corporate relocation activity.

The Midtown Business Association put on “Much Ado About Midtown,” a two-day festival that featured 160+ performing artists and exhibits. Held on Peachtree Street and closed to car traffic, the event was attended by tens of thousands of people.

The Memorial Arts Center at Peachtree and 15th was renamed the Woodruff Arts Center in 1982 to honor its greatest benefactor, Robert W. Woodruff. The campus expanded in 1983 with the addition of the award-winning Richard Meier-designed High Museum of Art building. 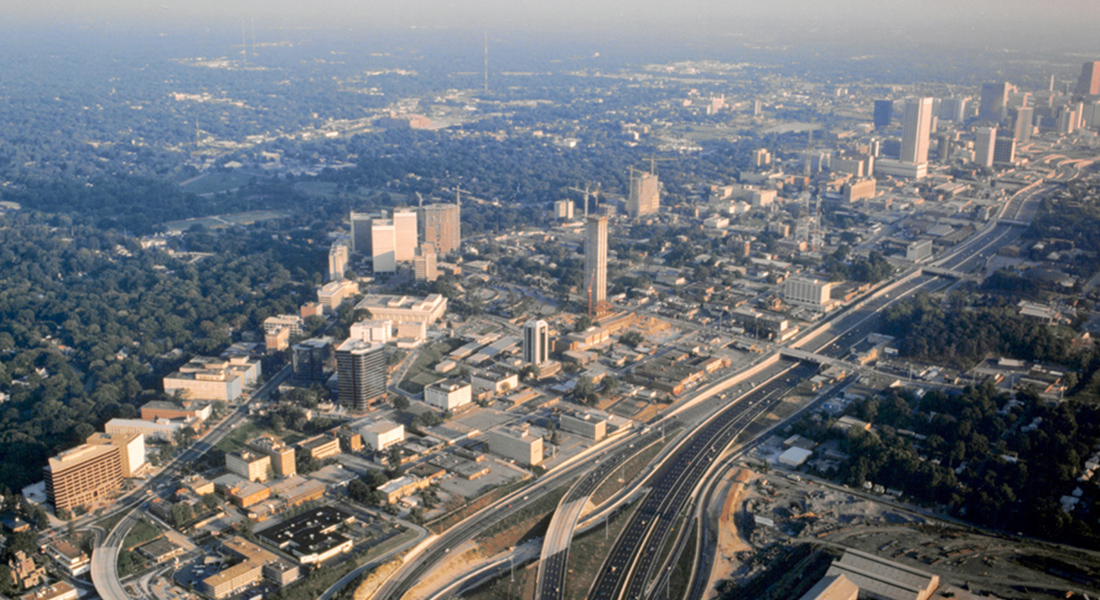 Midtown hailed the arrival of several trophy office buildings in the mid-1980s, forging a new identity as a corporate address of choice. Three towers - 999 Peachtree, Campanile and One Atlantic Center - all opened in 1987, introducing a combined 2M square feet of Class A office space. At the time, One Atlantic Center (known then as the "IBM Tower") was the tallest building in the Southeast at 50 stories.

The Midtown Business Association worked with Midtown congregations in the faith community in 1986 to establish the Midtown Assistance Center, which responds to 5K emergencies each year that help families on the brink of becoming homeless.

In 1989, Piedmont Park was in a state of neglect. Recognizing the park’s importance to Midtown, a group of Midtown Business Association leaders established the Piedmont Park Conservancy, the private, nonprofit organization dedicated to restoring and preserving the City of Atlanta’s largest urban greenspace.

Midtown Atlanta became the first area in the City to establish a mini-precinct for the Atlanta Police Department, strengthening public safety in the commercial business district.

The Midtown Business Association changed its name to Midtown Alliance to better represent its membership, which now included residents and nonprofits in addition to businesses. Its board and three-person staff worked to redefine the organization's mission, incorporating more urban planning projects as well as public safety and maintenance services.

Midtown Alliance started the Leadership Midtown program, giving emerging leaders a closer look at how their city works, and a mentor program that brought Midtown volunteers into Atlanta Public Schools classrooms to work with young people.

The 1996 Olympics changed Atlanta's course. Still, Midtown didn’t get much impact from it at the time, except for the Cultural Olympiad that was held in Midtown arts venues.

Mary Rose Taylor mounted a campaign to rescue the Midtown apartment house where Margaret Mitchell wrote Atlanta’s most famous book, “Gone with the Wind.” Targeted by arsonists and threatened by the wrecking ball, the site lay in ruin in 1994 when Taylor lined up allies and financing. The house museum was renovated and ready to open its doors for the 1996 Olympics — Atlanta’s moment on the world stage — when arsonists struck again. It was ultimately rehabbed again and opened the following year. 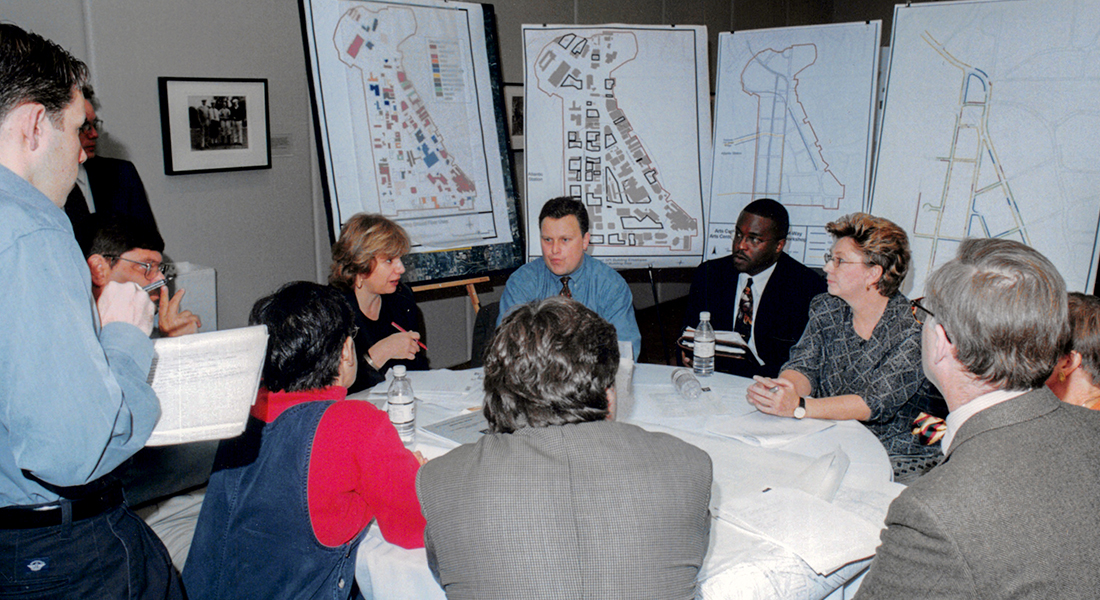 Suburban growth was happening on an immense scale, but no new development was occurring in Midtown after so much activity in the 1980s. Midtown lacked a cohesive plan. Blueprint Midtown became a turning point for the district in 1997, illuminating a path forward for growth, informed by community desires and supported financially by the Woodruff Foundation. The approach to the planning process centered on photos instead of heavy, academic text. This created a more relatable format for thousands of residents and workers to express what they wanted Midtown to look like, and how they wanted it to function.

The late-1990s brought major development announcements to Midtown. The Atlantic Steel site redevelopment became the largest brownfield redevelopment project in the U.S., creating what is known today as Atlantic Station. Georgia Tech also announced plans to expand its campus across the I-75/85 Connector, developing the first phase of Technology Square.

Midtown Alliance continued to develop and launch new initiatives to realize the Blueprint Midtown vision. With support from commercial property owners and the City of Atlanta, the Midtown Improvement District was formed in the spring of 2000, establishing a self-taxing entity to create public improvements and address security, maintenance, streetscapes, and traffic issues. Don Childress served as the MID chairman for its first 16 years. 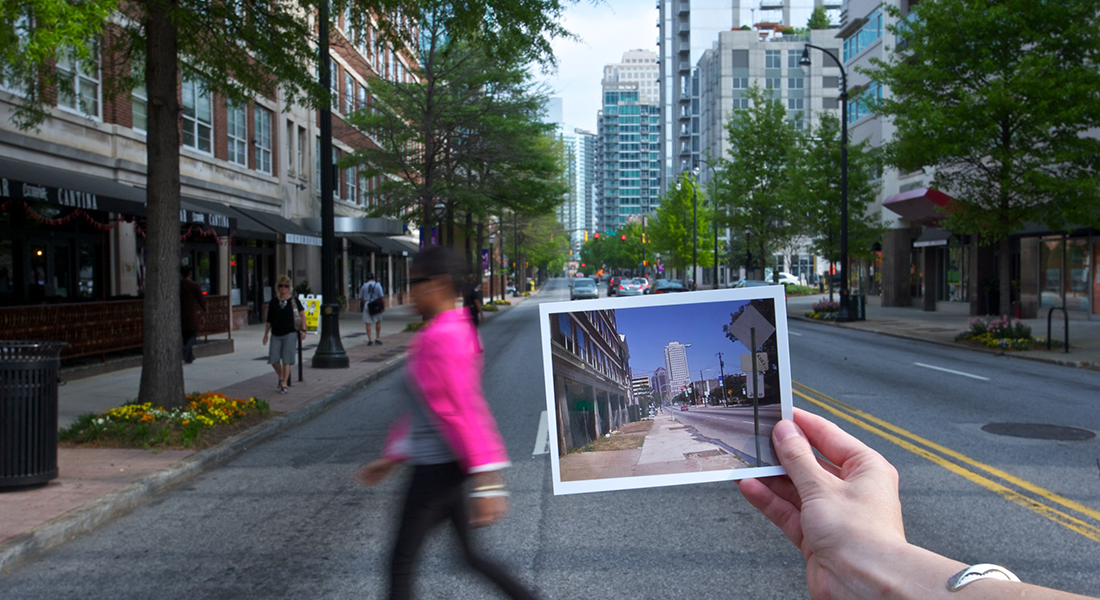 Over the course of the decade, the Midtown Improvement District leveraged $20M of investment to create $400M in public and private improvements in the public right of way. Midtown Alliance created several miles of streetscapes, planted nearly 1,000 street trees and buried more than four miles of overhead utilities.

Midtown Blue began 24/7 operations and patrolling in the fall of 2000, with an office on the ground floor of the 999 Peachtree building.

Midtown Transportation Solutions was formed in 2000 to assist workplaces with formal programs to reduce commuter traffic congestion through incentives that encourage greater use of alternatives to driving alone and brokering the sale of discounted transit passes to workers.

The Federal Reserve Bank of Atlanta relocated from downtown to Midtown, establishing a new outpost at the corner of 10th and Peachtree.

By 2002, many of the priorities outlined in the original Blueprint Midtown had been achieved. Midtown continued to evolve rapidly. Blueprint Midtown II launched in 2003 to refine the community vision for retail, transit and park space.

Tech Square laid the groundwork for Midtown's innovation hub at Spring and 5th Streets, connecting talent and entrepreneurs with commercial enterprise. Atlantic Station's mixed-use development opened in 2005, introducing new retail choices in the region. The Savannah College of Art and Design opened its Atlanta campus in Midtown, creating a new pipeline for talent.

Selig Enterprises built the award-winning 12th & Midtown complex, introducing a new mixed-use project in the heart of the district. Novare Group built Metropolis and many other projects in the district.

The Midtown Improvement District and the Woodruff Foundation teamed up in 2007 to deliver the 15th Street Park adjacent to Colony Square.

After a two-year overhaul, the 14th Street bridge that connects Midtown to West Midtown reopened in 2009. It brought many gateway improvements for people driving, walking, and biking, which helped workplaces embrace the use of commute options.

Between 2015 and 2020, some 24K jobs were announced for Midtown Atlanta, including 5,000 jobs that were part of NCR's relocation from Gwinnett County, the single largest influx of new jobs to the City of Atlanta in more than 40 years.

Georgia Tech and Portman Holdings broke ground on the Coda project at Tech Square in 2016, which created one of the largest high-performance computing centers in the U.S. The demand for office space near Tech Square galvanized Portman to build a total of three towers along West Peachtree, two of which will be anchored by healthcare giant Anthem. Down the street, Norfolk Southern is building 750,000 square feet of office space that will serve as its headquarters and bring 850 additional jobs to the city. 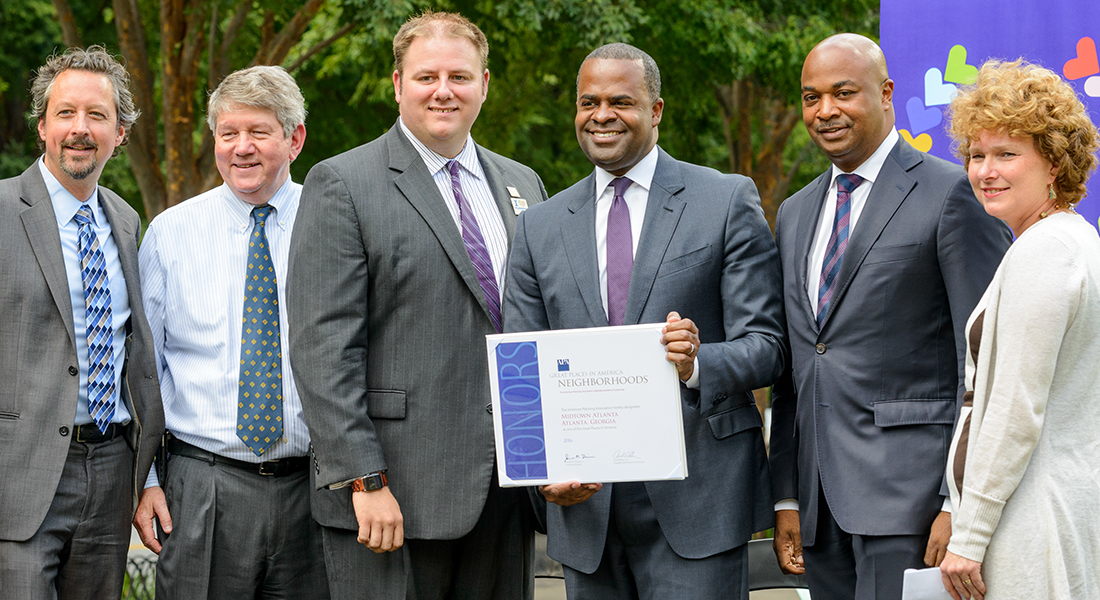 Midtown Atlanta was one of five neighborhoods in the U.S. to be named to the American Planning Association’s 2016 list of “Great Places in America.” The designation acknowledges the combined impact of bold design and decisive action that make Midtown a mixed-use, vibrant, walkable place.

Midtown Alliance and it partners are advancing 30+ public improvement projects in 2021 that will move to various stages of planning, design and construction. We’re on the ground every day, delivering programs and initiatives that support an exceptional urban experience in the heart of it all.

If the past 40+ years are any indication, what happens next in Midtown has the potential to be even more transformative.